When I first saw photos of the Ryder River Ridge group one horse in particular caught my eye. He looked so much like the off-track Thoroughbred I had purchased just a few months previous. This little rescue was simply named colt B39. I talked to my barn owner and my trainer and put in an application. I was thrilled to be approved and after he was stable enough we organized his transport from Louisiana to Georgia. When he first arrived late in the freezing February night I cried when I saw him up close. He was so bony and mangy looking. Right off the bat though he took everything in stride and settled right in, happily munching on hay pretty much 24/7 while we worked slowly to get his weight up.

We just received this updated from Shadow's family:

Shadow celebrated her 2nd birthday in March and she is quite a ham.  She is about 15.2 now and growing like a weed.  We love her SO much!

We are so happy for the McNeil family.  Shadow is a perfect fit. She was very aggressive with the other horses and totally untrusting upon intake, after having to fight for her food her entire life.  Shadow came right up to Sara McNeil on her first visit to Richmond Plantation and the two seemed to form a bond right away.  It was really amazing for us at LHRA to see this transformation.  Despite a rough start in life, our rescues can go on to be happy, useful horses and family members. 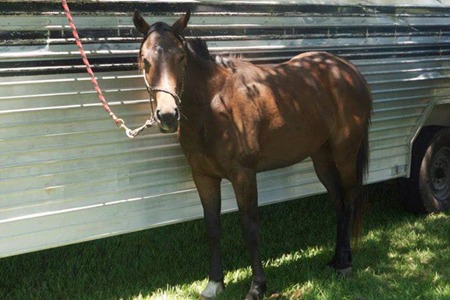 As we revamp our website, we are looking for more success stories and updated photos and videos of horses we have rehomed.  Please e-mail admin@louisianahorserescue.com to update us!

Mr. GQ came into the program from the track. He had a great home and we merely rehomed him.  The adoptive home could not keep him, so we took him back into the program, and he was adopted again as a trail horse.  His new owner quit paying his board bill and so GQ entered our program a third time.  Ginny Harrison adopted him and gave him a job as an eventer, which was a great channel for his energy.  GQ is now loved by a little girl in South Louisiana. 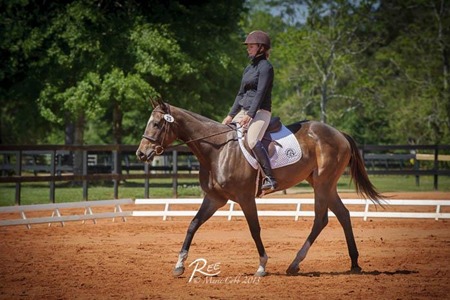 During These Times "Lola"

Lola is an off the track Thoroughbred who came to us from far better condition than most of our intakes.  LHRA exists as an avenue for race horses who are at the end of their careers, and of course other horses who have been abused or abandoned.

Lola made an impression on the Richmonds with her personality and barn antics.  She was dubbed "Princess Fiona" due to her sweet but sassy ways.  She was soon adopted by Lori Summers, a long time supporter of LHRA, and Lola has traded her racing cleats for show shoes.